On November 25th I attended a small conference organized by Future Processing in Gliwice. We get there, me and my two friends, in less than two hours of driving from Wrocław. The conference was held in a really lovely building within a complex of Upper Silesian Agency for Entrepreneurship and Development. Few hundred developers gathered for a single track composed of 11 talks 25 minutes each and finally a special guest talking for an hour.

At the end, there was an after party in a nearby bar (called “progress bar”, how cute!) with three discussion panels, food and beer.

Talks were grouped thematically into categories composed of two or three each. First were architectural ones, then frontend, cloud and finally big data. I decided to write more about few sessions I liked the most and to take liberty at titles translation, if required. Let’s start with the final one.

Alberto Brandolini: Optimized for what? Delivery is not the real goal 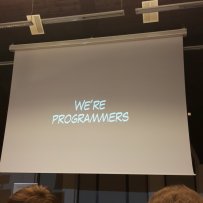 Boy, oh boy, this guy knows how to talk! Perhaps because he is doing this for a long time. Alberto started with introducing Daniel Pink’s brilliant book: Drive, and the key take away from it is that people need autonomy, mastery and purpose (quick poll revealed that only THREE people in the audience have read it, which was kind of surprising to me). We optimized software development tools and processes for predictability, predictability introduces boredom, boredom is the arch enemy of learning and learning is the essence of software development. Working code is a side effect of that. There were series of anti-patterns, like:

Each of them considered against autonomy, mastery and purpose. And of course there was a mandatory picture of a cat.

This talk was actually a bit scary and amazing at the same time. Pablo talked about an emerging trend of artificial intelligence research that attempts to model high level abstractions in data using multiple layers of neural networks and multiple transformations. The idea itself is nothing new, since it originated in seventies. But nowadays, we finally have the computational power and hardware support, as well as tremendous amount of data that can be used to teach machines things like flawless speech recognition, image classification, medical diagnosis, creating paintings in a style of chosen artist and many more. And, most importantly, doing this better and much faster than humans. There were also examples of software libraries that lets you start teaching your computer stuff in less than 30 lines of code. Ray Kurzweil predicted in his book in 2006, that we will create true strong AI within 25 years, so there are 14 left, and after this talk I somehow feel that it’s closer than we think.

I’m not that much into frontend, and recently I’m drifting further and further away from it, but I did a bit of Angular, including an intro article. Soon after, it was explained to me that Angular is so 2015ish and thus obsolete… I heard that Angular 2 is much different and backward incompatible, which made me curious to see what is it all about. Rafał introduced Angular 2 and its surroundings in a very pleasant way. I loved the story about the poor Angular village surrounded by JQuery barbarians and four hostile garrisons – Aurelium, Backbonum, Reactum and Emberum. Druid Googlix locked himself for two years and created a new, better elixir of strength. Sounds familiar? There was also about Angular Universal, Angular Material, TypeScript, Angular CLI and Augury.

Marek Śledziński: Microsoft Windows and the case of containers

While drifting away from frontend I delved into all that containers and cloud stuff. I’m also consequently refusing to use Linux as my workstation operating system so the native Windows support for Docker was something I wanted to know more about. And, it turns out that Windows 10 is doing not bad at it recently. As Marek suggested, those solutions are not yet production ready, but definitely worth looking into if you prefer Windows as your development environment. 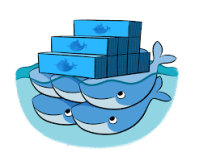 When you use container in production you should be familiar with container orchestration too. Paweł gave a decent introduction to container management ideas in general, and Docker Swarm in particular. I’m using Kubernetes in my production, so I was waiting for some kind of comparison. Unfortunately that was not really the case, but maybe it’s hard to talk about everything in 25 minutes. Based on the presentation, Kubernetes looks to me like much more mature orchestration solution than Doker Swarm, with the only advantages of the latter being simplicity and blue whale in the logo. Let’s give it some time though.

There were more talks, but I will not go into details on each one too keep this article within reasonable length constraints. In order of appearance, those were:

Actually it was my first software development conference in Poland. I was attending Jax London and Devoxx Antwerp before, but it’s entirely different level of event. Also, my previous conferences were about Java world, and here, beside general topics, the main theme was .NET. Last time I did something in .NET was 7 or 8 years ago, so it’s not really my story. The program was quite diverse and entertaining though, I learned quite a few interested things and overall it was a pleasant experience. Well done guys!

In 2017 I’m planning to attend more events of various calibers, so blog articles will follow. Stay with me and see you next time (perhaps in person).

Posted by gvaireth on December 1, 2016 in News, Technology