Not only working software, but also well-crafted software
Not only responding to change, but also steadily adding value
Not only individuals and interactions, but also a community of professionals
Not only customer collaboration, but also productive partnerships

Software Craftsman:  Professionalism, Pragmatism, Pride by Sandro Mancuso is the second book about the subject I’ve read recently. Thanks to Safari, even before the paperback edition is available on Amazon. Actually I had an occasion to attend the author’s talk on software craftsmanship at last Jax conference, but I’ve chosen in memory data grid which was probably mistake. Or maybe not, since we have everything on You Tube anyway.

The book came thirteen years after the one I’ve talked about earlier. It gives you a bit of history of the whole idea of software craftsmanship, books, articles, conferences, events and things like that. The basic ideas are described in similar way, to give you a good basic understanding, but there is much more.

A lot has happened in past thirteen years. We had an explosion of the whole Agile and Scrum thing popularity. Simultaneously almost no one does Scrum the way it should be done. Some people are at least aware they have ScrumBut (“you know, we have Scrum, but…”), some don’t. Anyway there is quite a lot of material in the book about issues with Agile transformations and what to do with it. There are several archetypes of problematic personalities like The Sceptic, The Evangelist, The Ivory Tower Architect and so on, and tips on how to talk to them to make things better.

A lot of attention is paid to the topic of management and recruitment of software craftsmen. I especially liked examples of good and bad job descriptions and the elaborate logic behind it. Sadly, most recruitment processes are far from being able to attract good programmers. They are done by people who just think in years and acronyms.

Also, importance of technical excellence is discussed. Some people tends to believe, that if they employ Scrum to their project, things will magically fix themselves and everything will be great. Bullshit. If you had mediocre programmers who produced crap, Scrum meeting, roles and artifacts won’t change that. You need to change the way software is written and thought about. Continues integration, tests, refactoring, striving for technical excellence and constant learning. Nothing comes for free, except coffee. If your company does not provide free coffee, leave it immediately.

Important message is, that craftsmen are not paid to work 9 to 5, do what is told them to do and go home. True craftsmen care. They are far more than just coders. They are there to help client achieve their goals. Through coding, motivating, organizing, sharing their knowledge and most importantly striving to make things better and transforming their organizations. They need to talk to their client, and try to understand what is really to be done. Unfortunately many organizations are stuck in previous era and not ready for this. There was a story about project that had a sole goal of bringing code coverage of code debase to 70%. It was off shored to different company, no one explained them any business logic and all the original programmers were to busy to talk. As it turns out, the reason for that is because some manager had a yearly goal, and fulfilling it gets him a bonus. So he fulfilled it blindly. Well, some people just need a high five. In a face. With a chair. 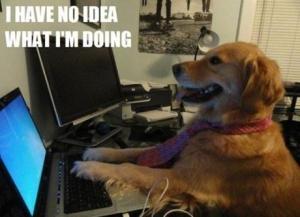 I enjoyed the personal feel of the book. Author presents his American dream story (or British, in that case) of poor kid from Brazil who wanted to be software developer in London. Now he is the founder of London Software Craftsmanship Community. There are a lot of true stories from the trenches, which are lively, convincing and I had a feeling “hey, I had this one too… just like that”. For me it was much more enjoyable than Pete McBreen’s book.

Finally, do not expect that your employer will train you, educate you, buy you books or anything. If he does, that’s great, but this is your responsibility to learn, invest time, money, energy and passion to be good. You own your career. You shouldn’t pursue “career in an organisation”. You should pursue your own career. That’s your life, isn’t it? If organisation’s career map is not aligned to what you want, they way you want, simply quit. Don’t be afraid. Each job is just a step on the long staircase to mastery. Some are longer, some are shorter, lower or higher. Some will lead you down, not up. But it’s everything about the beauty of the journey. It’s not about catching the rabbit, but chasing the rabbit. Have fun!

Posted by gvaireth on December 7, 2014 in Agile, Books